Transportation is needed for self-advocates to be part of their communities and to attend meetings and medical appointments. At the 2014 Self-Advocacy Summit, we hosted a meeting with Transportation Ministry staff to talk about our concerns and their plan. Here is a summary of that meeting.

‘Let’s Talk about Transportation’
Discussion with Albertans with Disabilities


On Saturday, June 14, 2014; twenty people with disabilities and supporters gathered together to talk about the 50 year Provincial Transportation Strategy.https://www.transportation.alberta.ca/ABTransStrategyhome.htm

We had an hour and a half to facilitate the discussion. We then split the hour and half meeting into 2 parts:

Part 1: We facilitated a talk about people telling us where they are from and asked “What is transportation like where you live?” People reported to live in southern rural communities, Lethbridge, Medicine Hat, Calgary, Red Deer, Grande Prairie and shared their experiences of what transportation was like in the communities they live.


Part 2:In the second part, Alan Windhorst then shared a short film and PowerPoint point about the draft vision, goals and suggested actions for the Alberta’s 50 year plan. The draft report can be found on the Alberta Transportation Website.


Here is what people said.


Part 1: Tell us where you are from and what is transportation like where you live?

Alan Windhorst is the Senior Manager of Transportation Corridors, Alberta Transportation and has worked in the government department for the last seven years. Alan talked to us about the videos, radio & TV Ads telling Albertans to give input on the development of the 50-year Strategy, which asked about what needs to be the priorities for the Alberta Government. We saw the short video titled ‘Learn more about the Transportation Strategy for Alberta’ and it can be seen on this website. https://www.transportation.alberta.ca/ABTransStrategyhome.htm


"The Government of Alberta is developing a Transportation Strategy for Alberta that will provide a vision for Alberta’s transportation system over the next 50 years. The Strategy will cover all forms of transportation, connections and ways to move people and products. It will also provide an overarching direction to help guide decisions on transportation investments, policies and programs."

The Strategy is being developed based on input obtained from Albertans during two phases of public consultations held in early 2014.

During phase one, (January and February 2014) public consultation sessions were held in 18 communities throughout the province to seek input on the Strategy’s development. Written feedback was also submitted to Alberta Transportation for review. Input from phase one formed the foundation of the draft Strategy that was made available for review and comment during phase two.

If we have any questions or would like additional information on the development of the Strategy, please contact TransStrategy@gov.ab.ca or 780-641-9328 (dial 310-0000 first for toll-free access anywhere in Alberta).

Alan then showed us three draft slides titled ‘Proposed Vision, Recommended Goals, and Suggested Actions’ and said there are also printed copies of the draft Strategy, titled “Connecting Albertans with Each Other and the World: A Long-Term Transportation”.

To see a list of all suggested actions, look at pages 8 to page 13 or the report. Full report https://www.transportation.alberta.ca/Content/docType5513/Production/Draft%20Strategy.pdf


Our Proposed Vision: An integrated, cost-efficient, multi-modal transportation system that is safe, affordable, and accessible to all Albertans.

Alan then showed us the draft recommended goals:
Alan then shared with us the part of the draft plan for suggested actions for accessible transportation. However some of our commentary also includes issues about safety, affordability and sustainability. Found in various parts of the report from pages 8-13.

Suggested actions in the draft Strategy related to accessible transportation include:
Alan said many partners, including the federal government, the province, municipalities and industry, will have to work together to help address these actions - it needs a coordinated effort.


When the Alberta government stopped giving Greyhound money to serve small towns in Alberta, Greyhound stopped going there. Now many Albertans who do not have a car are stuck. AACT sent a letter to the Alberta Minister of Transportation about this problem. 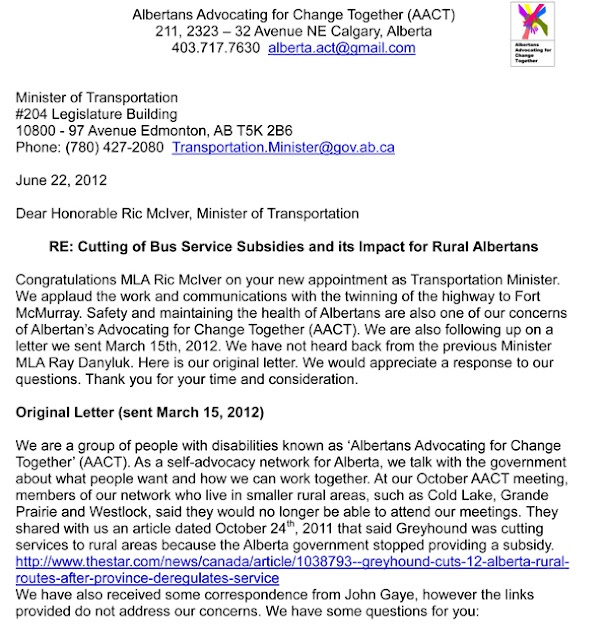 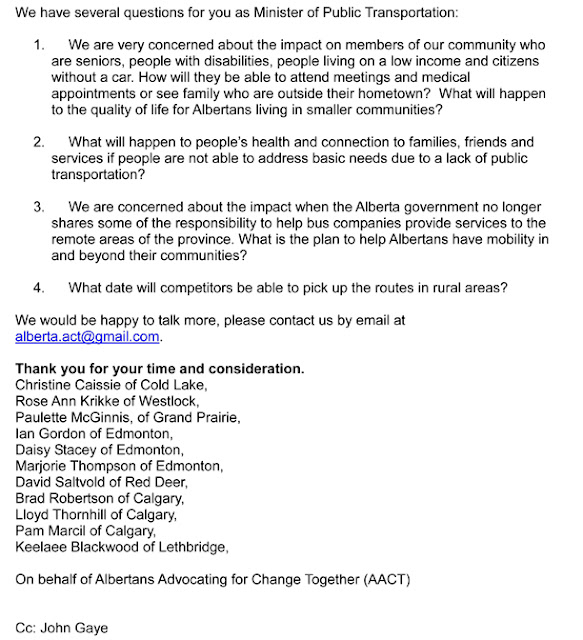